Back home from vacation and discovered that the sequel to The Last Fallen Star is out!  So everything else gets dropped while I read this one. 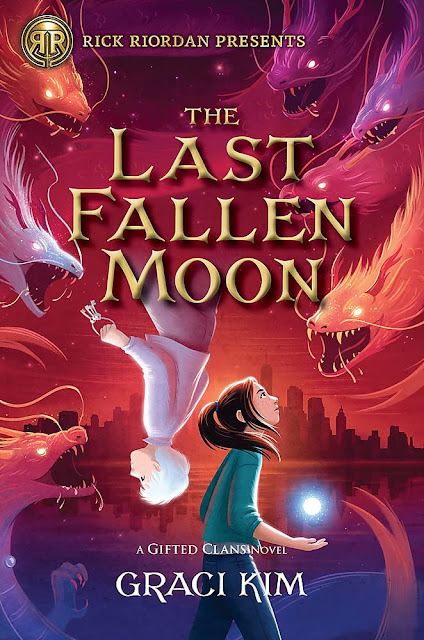 About The Last Fallen Moon:

For Riley Oh, life as the Godrealm’s last fallen star is not all it’s cracked up to be. Her new divine heritage doesn’t even come with cool magical powers; half of her friends and family (including her parents) can’t remember her; and to top it all off, the entire Gom clan is mad at her for killing the Cave Bear Goddess and stripping away their healing abilities.

But when their anger boils over and a group of witches curse Riley’s home, she knows it’s up to her to restore magic back to her clan – even if it means sneaking into the Spiritrealm.

Luckily, Riley has some backup. Along with her sister, Hattie, Riley meets Dahl, a heaven-born boy with shockingly white hair and a fondness for toilets who might not be telling the whole truth about who he is. Together they’ll fight vicious monsters, discover dark underwater worlds, and race to save the land of the dead from a fate that no one could have foreseen.

And this time, Riley won’t let anything get in her way. Because she can’t shake the feeling that something terrible is coming their way – and the gifted community is going to need all the powers they can get.

I read the first book in this series over a year ago, so it took a few chapters to remember what was happening and who everyone might be.  However, once that happened, the book started flowing and I remembered how much I enjoyed the first one and couldn't wait to find out what happens.

I love the combination of the Korean legends, the clans, gods and goddesses, interspersed with modern day technology.  The stories are still there, just made a little more modern which makes the whole book just more fun..  The relationships Riley has with her adopted parents and sister really shine through, despite the fact they can't remember who she is.   I'm also loving Dahl and am hoping he plays an even larger role in the third book of the series.