I think the highlight of book blogging might be the book tours.  Even before this, I was in the habit of requesting books I wanted on NetGalley, but it's much more fun to be part of a tour announcing a new publication and getting to interact with the author, publisher, and other readers.

Today's book tour is for The Daughters by Julia Crouch.  After reading the synopsis in a publisher Facebook group, I knew I absolutely had to request this book and thankfully received it.

My father said my mother killed herself. My sister says he’s lying.
The day of our mother’s funeral, my little sister Lucy and I clung to our father’s side. He promised he’d get us through it, and we believed him. But then I discovered that the coffin we wept over was empty.
Dad says he was trying to protect us – that he thought it would be easier to grieve if we didn’t know our mother’s body was never found. His new wife says she just wants to help us move on from the past.
Then Lucy has a flash of memory that leaves her shaking. Our father. A woman she doesn’t recognise. A knife…
She insists she knows something about the day our mother died, but it’s buried too deep to see clearly.
What happened to our mother? I need to find the truth. But I have no idea who I can trust. And what if the answer puts my life in danger?
A completely gripping psychological thriller that will make your heart pound as you try to decide who is telling the truth. Perfect for fans of Lisa Jewell, Paula Hawkins and Gillian Flynn.

What really happened to Alice?  Is it really suicide as the family has been told or is it something more sinister, like murder? Sarah, Alice's oldest daughter, is convinced there is more to the story and that her father and stepmother know more than they are letting on.  When her younger sister Lucy begins to have odd flashbacks, Sarah knows she has to find out the truth of what went on that day.

The mark of a good book, to me, is a book I just can't put down, usually involving me staying up till all hours of the night to finish it.  The Daughters is definitely one of those books! Except, I made the responsible grownup decision to start it earlier in the evening so I finished it up at a semi-reasonable hour.

That said, this book will keep you guessing and saying, "Just one more chapter," the whole way along. Each time I felt like I knew what was happening and who was responsible for Alice's death, a new tidbit of information was revealed that made me question everything I was convinced of thus far.  I kept swinging, pendulum-like, between two main suspects and really didn't have a solid guess which one was correct until the very end.  The twists and turns definitely keep the reader interested and the family secrets plot is always a winner. 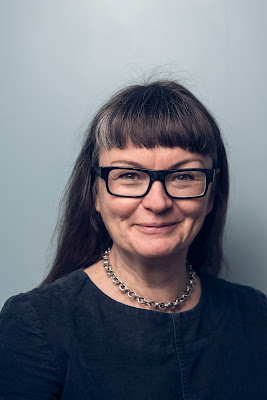 Julia Crouch started off as a theatre director and playwright. While her children were growing up, she swerved into graphic design. After writing and illustrating two children’s books for an MA, she discovered that her great love was writing prose. The picture books were deemed too dark for publication, so, to save the children, she turned instead to writing for adults. Her first book, Cuckoo, was published in 2011, and she has been writing what she calls her Domestic Noir novels ever since. She also writes for TV and teaches on the Crime Writing MA at the University of East Anglia. She has three grown up children and lives in Brighton with her husband and two cats, Keith and Sandra.