The House of Hades by Rick Riordan

Another bunch of books that needed to be read, then back to my Heroes of Olympus series.  Since I own these now (my SIL bought me today's read for Christmas), it is much easier to read them sporadically between library and book club choices. 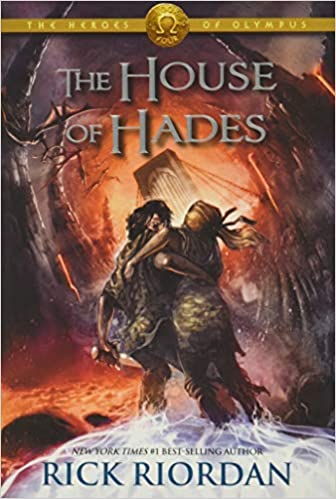 The House of Hades is book 4 in the Heroes of Olympus series, and features a double timeline along with multiple perspectives.  Percy and Annabeth have fallen into Tartarus at the end of book 3 and must attempt to journey out, along with closing the Doors of Death from the inside.  Frank, Hazel, Leo, Piper, and Jason remain on the outside and travel across Europe to find the outside of the Doors of Death to close them too, receiving help from Nico and Coach Hedge. With Gaea's army continuing to try and rise and various monsters and challenges along the way, all 7 demigods face danger as they try to reunite with each other, close the Doors of Death, and figure out how to return the Athena Parthenon to camp.

I've been loving all the installments of the series so far, and the fourth one is no exception.  One can sense some of the loose ends being tied up as this is the penultimate entry in the series and more parts of the story are coming together.  While I am looking forward to the ending, I'm in no rush to grab it.  I'm enjoying my breaks from other reads with this series and I'll be sad to see it end.