My second book club also had an April read and this one was Firekeeper's Daughter. And on the plus side?  Totally my style.  It's more contemporary fiction, but also really focused on the culture of the Ojibwe tribe.

Having grown up in Ontario, I actually wanted to go to Lakehead University in Thunder Bay and the language programs there (Ojibwe and Cree) totally fascinated me.  In the end, I stayed in southern Ontario and chose a more common degree, but there's still a part of me that kind of wishes I had tried that. 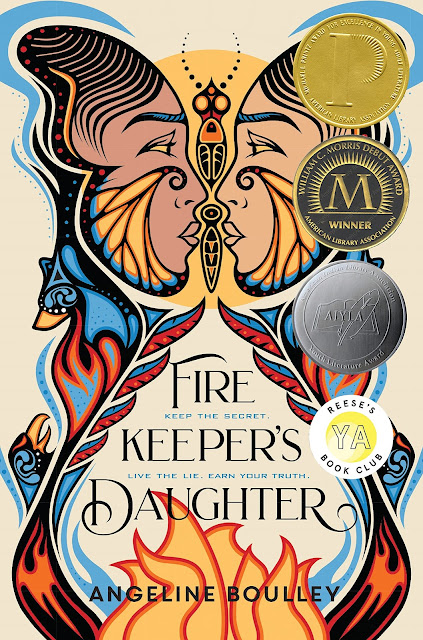 Daunis Fontaine is the granddaughter of a prominent white family, but her birth was a scandal, her father a young Native hockey player from the local reservation.  As a young adult, she has straddled the two communities, not fully belonging to either.  The sudden death of her uncle from a drug overdose has Daunis choosing to remain in her community to be near her mother along with her father's tribe  But her uncle's death isn't the only recent problem. Multiple murders along with drug problems on the reservation being to affect her life and the one person she can turn to is Jamie, the newest member of the local hockey team.  As these issues begin to come closer to home, Daunis becomes central to finding out the root causes, even if it means choosing sides in her community.

My friend actually chose this book and I am so glad that she did! I had looked at the cover multiple times because I found the design fascinating, but I always maintain a huge to-read list, so it was her prompting for book club that had me pick it up.  The story is compelling without being outlandish and the small town/community problems could be in any smaller town in the country.  But it's the Native American touches that really bring this book alive, from the ceremony and clothing descriptions, to the vocabulary, to the author choosing to confront common issues head on.  The mystery keeps pace and the reader is immersed in the community, wondering who would be willing to hurt their own for the sake of money.