I read the first in the Tita Rosie's Kitchen Mysteries late last year, probably in November or so.  Since I had found it kind of long after it was published, I was rather happy to discover the second book is now out too--Homicide and Halo-Halo. 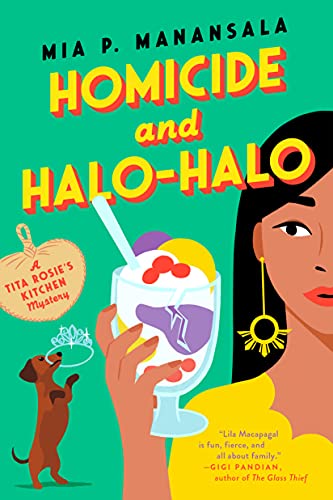 The series features Lila, a young Filipino woman who has moved back to her hometown after a break up.  After first working at her aunt's restaurant, she is set to open a new cafe with a couple of her dear friends, along with assisting in the local town pageant she once won.  The lead judge is soon found murdered and the main suspect is her cousin, Bernadette.  Despite the childhood rivalry between the women, Lila knows her cousin is innocent and once again gets involved in solving the crime.

I have absolutely no objections to another fun cozy mystery series, particularly one with amazing sounding food.  I can remember getting halo-halo back in Texas at a little restaurant we used to frequent and now I feel the need to find a new Filipino eatery in Colorado.  The story kept me guessing at least most of the way through the book until I finally picked up on a clue as to the motive of the murderer.  At that point, I had to know if I was right.

Also, Longganisa as a name for a dachshund?  Absolute perfection.