The Mark of Athena by Rick Riordan

Still working my way through the Heroes of Olympus series.  I had a few library reads come in since book two, so I postponed book three for a few weeks.  I finally had a little break in between, so I picked up The Mark of Athena to continue on with this series. 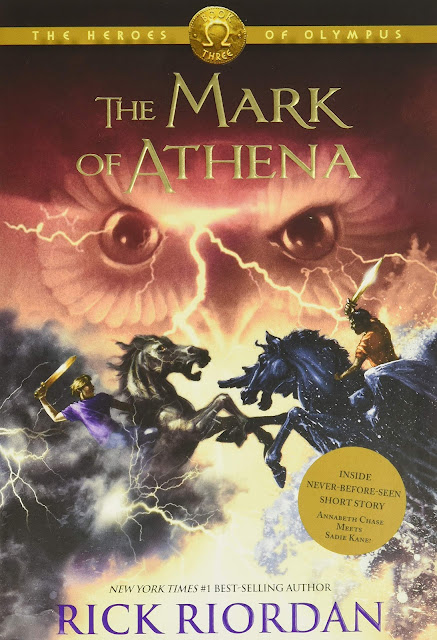 In The Mark of Athena, Annabeth, Percy, et al. are back.  Annabeth, Jason, Piper, and Leo have flown the Argo II from Camp Half-Blood to Camp Jupiter where they are reunited with Percy, Hazel, and Frank. The reunion between the Greek and the Roman demigods is short lived when disaster strikes and the 7 must flee Camp Jupiter.  As they begin their journey, Annabeth reveals that she has been tasked to follow the Mark of Athena, in order to find the Athena Parthenos, and that the rest of their tasks will depend on it.  This will take them across the Atlantic and back to the homes of the original Romans as they try to solve the prophecy.

I'm still really enjoying this series.  I loved the chapters devoted to Annabeth's story as I always wanted to know more about her, even in the original Percy Jackson books.  Like most of Riordan's series books, this one left off on a cliffhanger, but I'm being strong and not jumping right into book 4.