Besides my USO book club, I also have as second one with some online friends I have known for years.  We started it in January 2021 as one of my friends had a book club as one of her New Year's resolution that year.  A year and a bit later, we're still going strong.  We choose a book per month, then meet on the first Saturday morning on Zoom for book chat and catch up.

The last few months, we've been utilizing an Amazon First Reads pick to make sure all of us could easily get a copy of the book.  In the end, Cleopatra's Dagger by Carole Lawrence was our March pick. 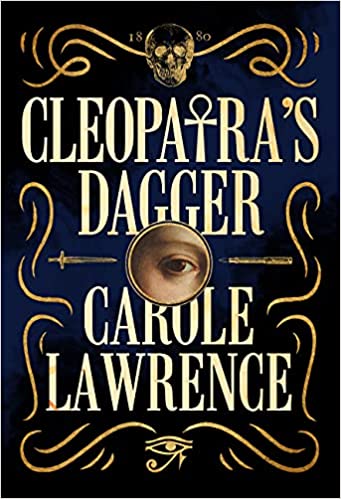 Cleopatra's Dagger is a mystery, set in New York in the 1880s, with a female lead character/amateur detective.  Elizabeth is the first female reporter at a major New York newspaper, assigned to the society pages, but harboring a desire to cover crime.  While she is convinced she has seen a murder occur, her boss sends her to cover a garden party, eventually leading her discover a body wrapped like a mummy in Central Park at the site of the Cleopatra's Needle obelisk.  Now assigned to the case, Elizabeth begins to follow the clues, finding more dead bodies, each with a connection to Egyptology, and discovering that there is a serial killer on the loose.

The book was quite a nice surprise.  I enjoy mysteries, Egypt, anything with strong female characters, yet I was a little apprehensive on this title for some odd reason.  In the end, I found it a compelling story that read more quickly than I expected, likely because I ended up really enjoying both the plot and the author's writing style.  The mystery was quite open, with multiple possible suspects, including one I was convinced was the murderer up until the true murderer was revealed.  The book leaves quite a bit of room to be a series of mysteries, so I'm definitely hoping for that.