I'm not really an audiobook person.  I much prefer to sit down with a hard copy or my Kindle and visually read a novel.  My husband, on the other hand, prefers audio so he can do things while reading.

But every once in awhile, I have to give up my preference and Agent 355 by Marie Benedict was one of those reasons.  The novella is only available as an Audible Exclusive and I absolutely adore Marie Benedict's books.  Thankfully, my husband has an Audible account and credits, and we were planning on driving up to Vail to ski, so we downloaded it for the car.  At just over 2 hours, it was the perfect length for me to enjoy. 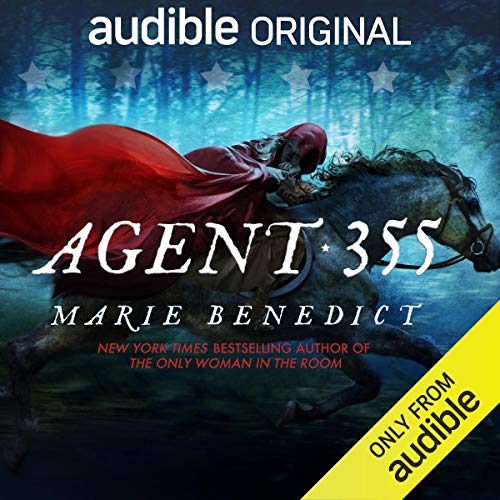 Agent 355 tells the story of the still unknown female spy, working for George Washington during the Revolutionary War.  Marie Benedict chose a potential identity for this spy, a young woman in society named Elizabeth Morris.  The daughter of loyalists, Elizabeth realizes quickly that she has access to many top ranking British soldiers, along with the advantage that no one believes a young woman would understand nor be interested in the politics of the day.  Using this knowledge, Elizabeth begins working with the Culper ring, forging and alliance with Robert Townsend and passing secrets on to General Washington.

While Agent 355 is based on a true story, the real name of the agent has never been discovered.  The secrets and information shared were true, along with the belief that she died while on board a prison ship.  Benedict does her usual amazing job blending facts with a fictitious background of forgotten women in history and I'm quite glad we opted to listen to the novella.
audiobooks historical fiction